I Don't Wanna Know What Love Is

Another instance of the angry cat picture.  This time with the caption, "I don't wanna know what love is      and I don't want you to show me".

This appears to be a reference to the 1984 power ballad by the rock band Foreigner, "I Wanna Know What Love Is".

The lyrics of that song contain, "I wanna know what love is
I want you to show meI wanna feel what love isI know you can show me"

The grumpy cat is uninterested in being educated and wishes to be left alone.

This photo appears to contain one of those witty buttons with a saying on it.  This one has the phrase, "either you LIKE BACON or you're WRONG".

There seems to be a fixation about with bacon lately.  Lots of humor with bacon in it.  Even the pairing or combining of unconventional items with bacon.

Just like with Kevin Bacon, it appears that I am always six steps away from bacon.

This is a document written in a way and on paper such as to appear from a much early day.  It appears that it has been folded at one point and unfolded.

The document says, "Life is very short & there's not time for fussing & fighting my friend".

It would appear that this document is to encourage forgiveness, long suffering, and patience.

Used to Laugh and Call Him Names...Good.

This is just one of many pictures with an angry looking cat in them.  The cat is at the bottom, middle of the image with music notes about his head.  The caption reads, "...All of the other reindeer used to laugh and call him names..."

Next to the cat is the word "GOOD".

This is a photo of a small manger.  There is text over the manger says, "King Sized Bed".

This is referring to the fact that Jesus was laid in a manger after he was born and he is the King of Kings.

Out of Control Pet Owners

This is a picture of a couple reading in bed.  The man is reading a book and the wife is reading on a laptop.

There are dogs all over the bed, on top of the couple.  One of the dogs is a fairly anatomically correct male dog laying on its back with its rump in the guys face.

The wife has an excited look at her face and she is saying, "Look honey!  There's a beautiful little puppy here that needs a home!"

The husband is looking up from his magazine and giving her a dirty look.

This is a drawing of a guy on a pedal bike next to a guy in a boxy car.

The guy an the bike has his mouth behind his handle bars, so they look like they are making a smile.

The guy in the car has his mouth behind his steering wheel, which make it look like he is frowning.

It is supposed to be a commentary on the happiness and freedom of biking and the boxed in feeling of driving and being stuck in traffic.

Department of Corrections - What Do They Do?

I know a couple of correction officers.  One of them posted this image.

The header says "Department of Corrections".  It has six pictures inside.

The first one is a picture of what appears to be a swat team or riot control team in combat gear with helmets, shields, and bullet proof vests.  The caption on that picture is, "What my friends think I do."  The shields are labeled CORRECTIONS, instead of SWAT.

The second picture looks like a compound on fire from the vantage point of a sniper or perhaps a helicopter.  The caption on the photo states, "What my parents think I do."

The third photo is what appears to be police in riot gear breaking up a riot.  One cop has someone on the ground roughing them up.  It has a caption , "What society thinks I do."

The fourth photo is a chunky security guard passed out taking a nap at what I assume is supposed to be his guard post.  There is a caption of, "What my boss thinks I do."

The fifth photo is a scene from Kindergarten Cop.  It is Arnold Schwarzenegger in farmer get up and a straw hat playing a ukelalie to a room full of kindergartners.  The picture presents, "What I think I do."

The sixth photo is a line of inmates lined up for inspection and a guard frisking one of them.  The caption reads, "What I actually do?" 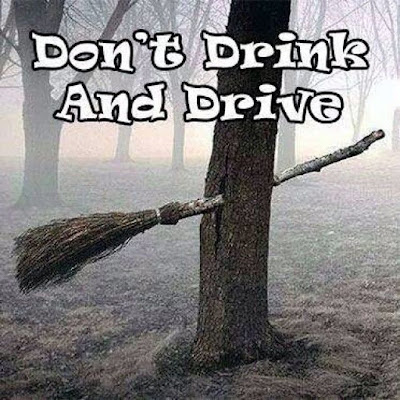 Here is a picture of a ratty looking straw broomstick stuck through a tree with the words "Don't drink and drive" next to it.  The tree is in a foggy woods where all the trees have no leaves on them.  The ground is grey and dusty with hints of dead grass.  This atmosphere is to make it somewhat creepy.  The implication being that some witch was flying her broomstick through the woods and was drunk.  That being the case, her reflexes were slowed and she was unable to navigate the trees in the woods without crashing into one.

The picture appears to have been part of an advertising campaign to discourage driving motorized vehicles while intoxicated.  There is an inscription at the bottom of the photo that says Save a Life.  Either to make the picture more authentic or to signify the company that paid for the ad.

Frosty Gets Caught Picking His Nose

I picture of a grocer looking at a snowman with no nose digging through a bin full of carrots.  The caption says, "Frosty gets caught picking his nose."

Often times snowmen will be made with carrots for noses.  Carrots are readily available, cheap, and sturdy.

What We Used To Be

This is a picture of President Obama, apparently at the site of the aftermath of Hurricane Sandy, hugging some downtrodden looking woman.  The caption read,
"What we used to be before the tea party, before the Koch brothers, before Rush Limbaugh, before the birthers...Americans"

Rush Limbaugh was born in 1951, so that sounds about right.  That likely gets us back far enough to where it wasn't a sin to be an American.  That gets us back before the Obamas, Clintons, and Bushes.  Back before selling out to Middle East oil.  Back before out country was run by organized crime.  This includes unions, politicians, and big business.
Posted by Brook at 4:51 PM No comments:

Do Not Cross This Pasture

A sign that is posted on the guardrail to what is presumably a pasture.  The sign's text reads, "Do NOT CROSS THIS PASTURE unless you can do it in 9 seconds, because the bull can do it in 10."
Posted by Brook at 4:35 PM No comments:

Welcome To My Mind

This is a picture of the Tasmanian Devil.  The caption reads, 'Welcome to my mind.  Please secure your seat belt, keep your arms and legs in at all times. Don't feed the animals, drink the water, or talk to the voices.  Enjoy the ride."
Posted by Brook at 4:31 PM No comments:

Here we have a picture of what appears to be some sort of Mazda car park in a Wal-Mart cart return stall.  The person that sent this to me commented, "Black Friday...... don't you love it!! The extremes some go through just to get a closer parking spot!!!"

To me it speaks to the mental state of Black Friday shoppers.

The photo appears to have been taken in an Indiana Wal-Mart parking lot.

Although, I am trying to make sense of the photo.  It appears that it is a convertible with the top down.  I think on Black Friday in Indiana it was cold this year.  Also, it doesn't appear to be the type of car that someone would park near the cart return, let alone in the cart return.  It seems like they would be concerned about it getting scratched.


What we have here is a picture of a rabbit with its face in its hands with a caption that reads, "All of those innocent field mice and I just bopped them on their heads".

I am assuming this refers to the Little Bunny Foo Foo song that is used to teach kids rhythm, rhyme, and motor skills.:

I gave you three chances and you didn't behave, so POOF you're a Goon.