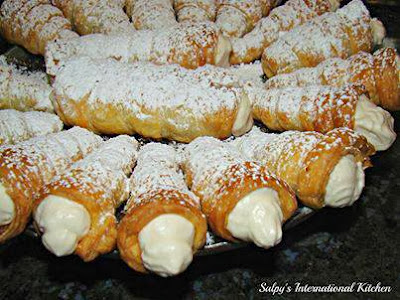 In the bowl of a stand mixer with the whisk attachment, beat the cream until it starts to slightly thicken, add the sugar and vanilla and beat a 30 seconds longer on medium speed just to incorporate the sugar into the cream, remove from the mixer bowl into a clean cry bowl and set aside. Replace the attachment to the paddle and beat the cream cheese on high speed until smoothed. Replace the attachment again to the whisk and while the mixer is on low speed, gradually add the cream mixture, once all the cream mixture is in the bowl, increase the speed to high and beat for 1 or 2 minutes, just until the cream thickens enough to form stiff peaks. Refrigerate the filling mixture until time of use.

On a lightly floured surface, roll pastry dough into 1/8” thick rectangle measuring 15” by 10”. Cut dough lengthwise into 1” wide strips with a pastry wheel or a knife.
Take a strip of dough and squeeze around the tip of mold to form a seal. Wrap the strip around the mold, overlapping consecutive turns slightly. Seal end of the dough at the large end of mold. Place sealed edge down on a baking sheet. Repeat with remaining strips of dough. Refrigerate molds on baking sheet about 30 minutes to allow the dough to relax.
Heat oven to 375F. Brush pastry with egg. Bake until golden, about 15 minutes. Cool completely. Fill with the Cream cheese filling and fresh raspberries or blueberries if using. Dust with confectioner’s sugar and serve.