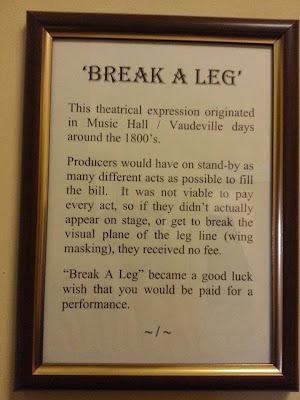 This theatrical expression originated in Music Hall / Vaudeville days around the 1800's.

Producers would have on stand-by as many different acts as possible to fill the bill.  It was not viable to pay every act, so if they didn't actually appear on stage, or get to break the visual pane of the leg line (wing masking), they received no fee.

"Break A Leg" became a good luck wish that you would be paid for a performance.
Posted by Brook at 10:09 AM